In a world where membership in one of the four magic guilds guarantees respect and wealth, it is strange that Lucinda Guillierre is terrified of being exposed as a witch. The Fire Warlock finds her attitude puzzling, but does not give her his full attention until a long-buried secret comes to light.

She has good reasons to be afraid.

As war looms and dangerous romance beckons, who will have the best chance to kill her? Her enemies, her friends, or Lucinda herself?

NEVER, EVER, LIE TO A WARLOCK

He never promised happily ever after, but Lucinda is still dismayed by how quickly reality intrudes on her fairy tale. Assassination attempts and lightning strikes disturb her honeymoon, but the return home brings no peace of mind. When the discovery of a magical conspiracy shakes her faith in everything she trusts, she vows to expose the Fire Warlock’s most shameful secret and see justice done.

As a hot summer draws towards a violent end, Lucinda teeters between terror and rage. She’d be less angry about risking her life if she didn’t suspect her husband – her hero! – intends to step aside and let her die. 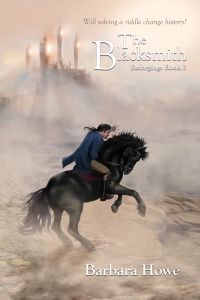 How is the king like a blacksmith? He has a hammer as well as a sword.

Duncan Archer has heard that riddle many times, but he doesn’t know what it means. No one does, not even the members of the Royal Guild of Swordsmiths. It isn’t Duncan’s business anyway. Good sense tells him to stick to beating iron into shape for the residents of his backwater town, and not worry about the king and his nobles pounding Frankland into the ground.

But good sense never stopped Duncan from poking his nose into everyone else’s business. If it had, he might not be a fugitive, the subject of the biggest manhunt in the country’s history.

With a charge of murder hanging over his head like a sword, understanding that riddle becomes much more urgent…

Equinora, the world where horses live in harmony with people, is in trouble. The six unicorn guardians created by the Goddess have abandoned their roles and vicious bloodwolves rampage across the land, massacring the herds and villagers.

Fleet, a young stallion without a territory, dreams of galloping with other horses and building a herd of his own. But an attack by a bloodwolf leaves him poisoned and alone. Driven by despair and a promise to fulfil his dying dam’s vision, Fleet sets out to discover how to vanquish the bloodwolves. The only help the renegade unicorns provide is to insist Fleet follow a prophecy to confront the villainous Shadow, an equine so powerful that the Goddess imprisoned him to prevent him destroying her realm.

Accompanied by Yuma, a young man desperate to escape his destiny, and Tatuk, a tiny dragon, Fleet seeks Shadow and a cure for the bloodwolf poison. But even as he begins to fear the selfish unicorns have sent him to his death, he discovers a secret that might mean he has a chance to save all horses and people from annihilation.