IFWG is very happy to announce the acquisition to the rights of New Zealand author, Deryn Pittar’s science fiction/post-apocalyptic novel, The Carbonite’s Daughter. “IFWG had the pleasure of publishing a short story version of the story by Pittar in SQ Mag some years ago,” said Gerry Huntman, Managing Director of IFWG, “and yes, there is certainly precedent for expanded stories to end up magnificent works, and achieving success. We believe The Carbonite’s Daughter is one such work. We are over the moon.”

IFWG has had a long standing relationship with the New Zealand speculative fiction writing community, and this work will add to this strong set of partnerships. Notwithstanding these trying times, IFWG believes that this work will be released in Q4 of 2021. 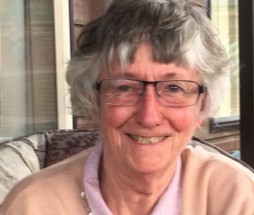 Deryn Pittar has published Sci-Fi., fantasy, futuristic and contemporary romance, loves writing short and flash fiction, and is an occasional poet. She belongs to SpecFicNZ, and the Romance Writers of N.Z. She reads and critiques for fellow authors and listens to their advice in return.

In 2020 she gained fourth equal with her sestina ‘Australia’ in the Frank DiBase International Poetry contest.

Her dragon novel Lutapolii – White Dragon of the South is a prize-winning fantasy, winning a Sir Julius Vogel Award at Geysercon in 2019 for Best Young Adult published in 2018. She also won the short fiction contest at Geysercon with ‘Hendrik’s Pet’.

In 2016 she won a Steam Punk fiction prize with her short story ‘The Carbonite’s Daughter’, which became the inspiration for her novel of the same name.

This is a novel of life in New Zealand when scattered populations in the Southern Hemisphere have survived world-wide destruction from a nuclear war. A collection of small communities survive in a maze of tunnels within the Southern Alps. They are connected by a railway which runs between Queenstown and Wanaka in the south, to Arthur’s Pass in the north. The southern towns under the Dome provide interludes of sunshine and natural living for those in the tunnels who have earned it.

Being the daughter of a Carbonite isn’t easy. Calista is a breeder and to continue to enjoy her status she has to play her part: a third insemination looms. She doesn’t want another child and life is boring.

Then her father returns, not at all dead as assumed by the authorities. He wants her to join him outside, to see the world and learn to live.

She has a choice. Her father says:  ‘to lead or to breed’.

Her journey into the unknown begins. Fear, created by the lies she’d been fed, feels overwhelming and confusing, but slowly she acquires new skills, grows braver – and then begins to make her own decisions; some good, some not so good. But the Mic’s (Men In Charge) are not happy that she has left and send scouts to find her and bring her back to the tunnels.

Who wins in this battle over what is right and what is wrong with the world? And who cares what Calista thinks?

IFWG has recently taken stock of our titles that are authored by New Zealanders, and we were gobsmacked by the number. Take a look – what talent and what a range of genres and reader age groups!

Barbara Howe’s Reforging series: The Locksmith, Engine of Lies, and The Blacksmith (with more to come). Epic fantasy for young adults to adults, with strong female protagonists (which motivated Howe to write the series)

Paul Mannering’s Drakeforth series: Engines of Empathy, Pisces of Fate, and Time of Breath (and again, more to come). Fantasy with strong satire and humour. Paul’s work has a strong fan base appreciating his unique style.

Kura Carpenter’s The Kingfisher’s Debt, an urban fantasy set in Dunedin with powerful twists to well-known tropes. This book has already garnered critical acclaim and awards.

Lee Murray’s Dawn of the Zombie Apocalypse, a middle grade fantasy/horror novel. Lee’s reputation internationally is growing by the day, and this recent release is a strong foray into horror for young teens. Funny, obviously set in New Zealand for those in the know, and a story that entrances readers of all ages.

Ali Foster’s Ginomees Trilogy for children, and illustrated by Ali. The Rejects, The Clonestone, and The Cave at the End of the Universe. Cosmic-spanning adventure of rejected garden gnomes venturing out into the world to find meaning in life. Great to read to your young ones.

All these titles are available world wide as ebooks or print, online or bricks and mortar. 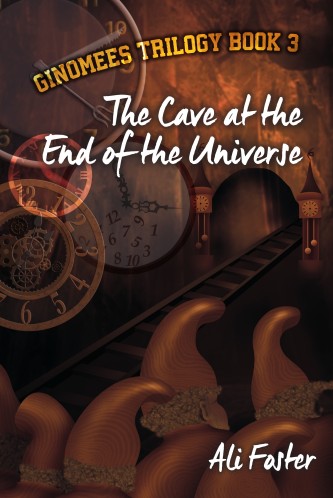 It is with great pleasure that we can announce the release of the third and final instalment of Ali Foster‘s children’s Ginomees Trilogy, The Cave at the End of the Universe. “It has been a pleasure to work with Ali on this series, and marrying her wonderful sketches with her fantastical writing,” said Gerry Huntman, Managing Director of IFWG. “The concept of cast-away garden gnomes having lives and souls – and very different personalities – was enchanting for us at IFWG and we knew this was a worthwhile project. The three covers by the very talented New Zealand artist, Cheryl Smith (of Macarn Designs) was the icing on the cake.”

The Cave at the End of the Universe is, like its two predecessors, available in all good bricks and mortar and online stores, including in various ebook formats.

The first two books in the Ginomees Trilogy: 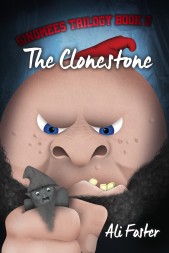 IFWG is very pleased to announce that Kura Carpenter has won the Best New Talent category in the 2019 Sir Julius Vogel Awards, in New Zealand. It is in response to her novel, The Kingfisher’s Debt:

The award came with a commentary:

The Kingfisher’s Debt is Kura Carpenter’s debut novel and very cleverly set in an Urban Fantasy world overlaying (or underlying, depending on your perspective) Dunedin, New Zealand. The writing is crisp, the plot excellently designed and executed. The work, I believe, clearly shows a writer who has taken the writing process seriously, from conception to drafting, to re-drafting, and producing a book that fits neatly into the Urban Fantasy genre while also having a strong Kiwi flavour.

It is with great pride that IFWG announces the release of Cthulhu: Land of the Long White Cloud, a Lovecraftian anthology of short fiction by New Zealand authors.

“IFWG Publishing Australia has published two Australian volumes in the Cthulhu Deep Down Under series, with a third coming in 2019,” stated Gerry Huntman, Managing Director of IFWG, “but I had the privilege and opportunity to meet and befriend a lot of talented dark and weird fiction writers in New Zealand, and it made a lot of sense to publish an anthology of Mythos fiction from a land referenced so vividly by Lovecraft. This is the exciting culmination of that idea.”

New Zealand—Aotearoa—Land of the Long White Cloud: the island remnants of the sunken continent of Zealandia. With its boiling geysers, active volcanoes, earthquakes, deep water fjords and lush forests of fern, these are realms once home to forgotten creatures like the giant Moa bird Dinornis. But there is something else…

In this collection we find an Aotearoa with the proud history, myths, and legends of the Māori, and the impacts of the white settler’s later presence, and the blended society that encompasses both, but we see the shadow of other things.

Herein lies the cosmic horror of the Old Ones of the Cthulhu Mythos in an anthology featuring Lovecraftian tales from some of New Zealand’s finest speculative fiction writers.

Stay brave. Because here there be monsters.

Print and Kindle versions available now, except in North America (released in November 2018).

IFWG is offering preorders of Kura Carpenter‘s urban fantasy novel, The Kingfisher’s Debt, set in New Zealand. The title will be on sale in Australia, UK and New Zealand on 28 September 2018, and is available for preorder until the 10th August 2018. Those who preorder will receive their copy on or just before the release date.

Within the small coastal city of Dunedin, local translator, Tamsin Fairchild has a reputation she hates. People think she’s psychic…

Always hovering around and interfering in Tamsin’s life, part father-figure, part thorn in her side, Detective Jackson, is an old-school cop. Childhood friend to her deceased mother, Tamsin wonders  could her mother have let an outsider in on the truth?

Newcomer, rookie cop Scott Gale is forced to team-up with Tamsin when they investigate the disappearance of a newborn baby and a bizarre crime scene—satanic ritual or hoax?

More and more the blame starts to point towards Tamsin…

Tamsin must uncover who’s framing her, find the baby before it’s too late, unravel the mystery behind her elder brother’s disappearance, and stop Scott from entering a world not meant for human eyes.

But Scott has family secrets of his own and Tamsin doesn’t know who to trust.

But can you trust Tamsin? What if the person who saved your life is about to frame you for murder?