IFWG is pleased to announce a book deal with New Zealand author, Piper Mejia, for her young adult novel, Dispossessed. “I am continually astounded by the speculative fiction talent that can be found in New Zealand,” said Gerry Huntman, Managing Director IFWG, “and Piper’s novel is no exception. It is original and steeped in its New Zealand setting. A wonderful acquisition.”

Dispossessed will be released in the first or second quarter of 2021. 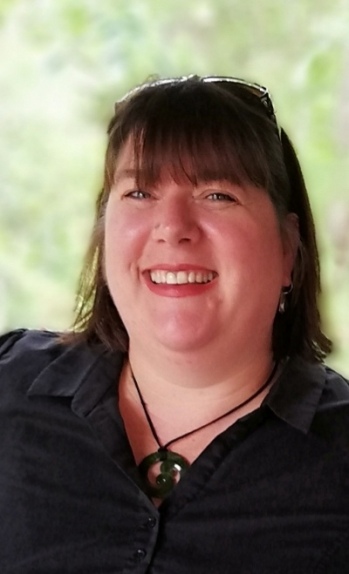 Piper Mejia is an advocate for New Zealand writers and literature. Her short fiction has appeared in a range of publications including; Room enough for Twoin Te Korero Ahi Ka (2018) and a collection of her short stories will be published by Breach in 2019. In addition to writing, Piper is a founding member of Young NZ Writers – a non-profit dedicated to providing opportunities for young NZ writers. As a child, Piper stayed up late laughing at horror films. As an adult, she spends a lot of time being disappointed by plot holes and yet somehow she has never lost her love for Science Fiction and Horror; two genres that continues to ask the question “What if…”

Nobody likes you when you’re the ugly new kid. A hoodie and a new foster home won’t hide the creeping dread that you are dangerous. So, when you’re offered the chance to meet a grandfather you never knew, you jump on a plane to the bush-covered mountains of New Zealand.

Slate longs for a home when he finds himself living among an ancient race masquerading as travelling performers. Dispossessed and disillusioned, Slate fears being trapped in a life hiding from the world; one his own father had to run from.

However, the decision to stay or leave is taken from him when he is held captive by hunters on the trail of the ultimate game trophy. Tortured and alone Slate fears that the only way to escape is to become the monster he never wanted to be.

IFWG Publishing Australia is closing in on the final titles to be released in 2020 and it is with great pleasure that we announce the acquisition of Canberra-based author Russell Kirkpatrick’s fantasy novel, Silent Sorrow, the first of his The Book of Remezov series. “Russell has a wonderful record in fantasy literature,” said Gerry Huntman, Managing Director of IFWG, “and his newest manuscript blew our team away for its originality. Kirkpatrick’s work is a great inclusion for our catalogue, and adds a certain fantasy dimension to 2020 that we have long sought for.”

Remezov of Sarella is a brilliant and ambitious young geographer who, despite his low birth, is determined to be the greatest scientist in all of quake-prone Medanos. He has arrived in the ancient city of Hanemark to be received into the powerful Guild of Geographers – the youngest inductee in decades. Only then will he finally be rid of his despised heritage.

But Remezov has a secret. He’s found a dead scientist’s diary and hopes to pass off the work as his own. It tells of an imminent invasion of Necronym – malevolent beings with the power to set off world-shaking earthquakes. Superstitious nonsense, of course, except the diary explains strange occurrences that have been puzzling him. Should he surrender it, risking expulsion from the Guild and the loss of everything he’s worked for, all for a crazy warning of an invasion that may never come, or keep it and use it to make his name? It’s a decision he has to make soon, because he’s being hunted by something leaving a trail of mutilated bodies across the city. 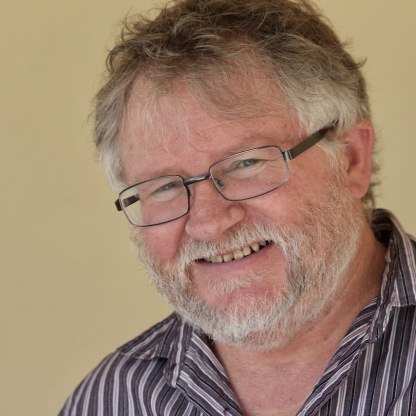 Photo Credit and permission to reproduce by Cat Sparks

He has written two fantasy trilogies, Fire of Heaven and Husk. Across the Face of the World was the biggest selling debut fantasy in the United States in 2008. He won the Julius Vogel award in 2008, 2009 and 2010.

Silent Sorrow is expected to be published internationally in the second quarter of 2020.

IFWG Publishing is pleased to announce the signing of a two-book agreement with Ian C Douglas, to complete the 5-part middle grade science fiction Zeke Hailey series. “This has been a successful partnership for the first three books and this final contract is the natural conclusion to see us through 2019 and 2020, ” said Gerry Huntman, Managing Director of IFWG Publishing. “We love Ian’s books and we know young teenagers do too. The refocus over recent years on Mars exploration and the possibility of life and terraforming on the planet, further makes this series relevant to our young audience.” 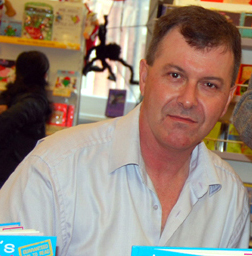 Book 4, Electron’s Blade, will be released worldwide in early June, and the final book, untitled as yet, will follow a year or so later.

For those who want to catch up on this amazing adventure, click on the images below to find out more about the Zeke Hailey series: 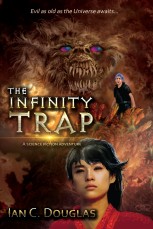 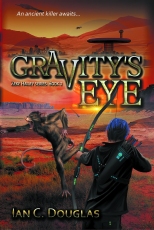 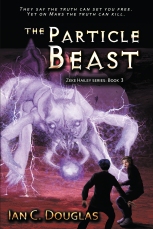 IFWG is over the moon with the acquisition of Jack Dann’s new novel, Shadows in the Stone. This will be a significant work added to Jack Dann’s impressive catalogue of works, and we believe, one of his outstanding pieces.

Jack says: “Like The Memory Cathedral, Shadows in the Stone came to me initially as an image; not one overwhelming catalyzing image, but a series of images. The first and strongest image that come to mind are two illustrations depicting scenes from Milton’s Paradise Lost by John Martin (1789-1834), an artist famous in his own time, but now largely forgotten: two mezzotints, entitled “Pandemonium” and “Satan Presiding at the Infernal Council” seemed to me to encapsulate (or perhaps generated) my vision of the aeon Belias as dark angel and place.” 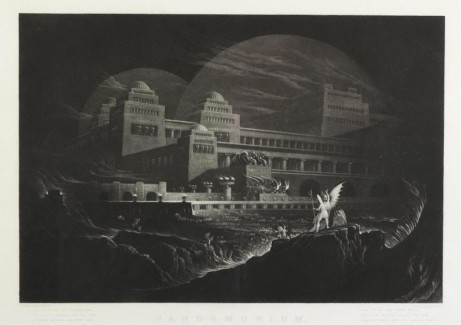 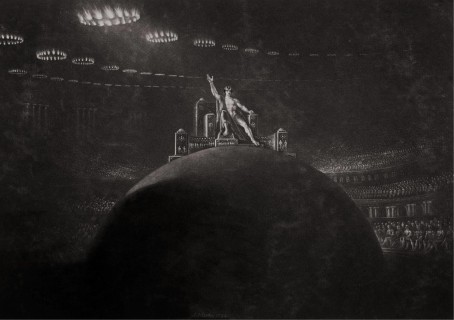 Satan Presiding at the Infernal Council by John Martin

The following is the accompanying text from the novel:

As the theurgist Pico Della Mirandola fell into eternity, into the abyss of souls, Pietro Neroni and the aeon Athoth journeyed across Belias’ empty, crystalline wastes.

In a sense Pietro and Athoth were stepping over or passing through the dark aeon’s volcanic, thundering body, for Belias and his world—his dark heaven—were the same, each a glittering reflection of the other, a reflection of a reflection, a reflection nested in itself; and if one wished to visualize these moments as Pietro experienced them, one might imagine Athoth, the beautiful aeon Athoth and his club-footed companion Pietro simply walking together. Around them was a darkness so deep and sharp and soul-destroying that the surrounding mountains and cratered ice sheets were simply chiaroscuro contrasts of the same tenebrous void. As Pietro moved through this negative terrain, he imagined that he was looking into (or through) a crystal gazing globe that had been crazed with glittering cracks, so that the darkness within appeared as shards of black, their various changing shapes defined only by slight differences of darkness and edgings of silver.

The darkness was palpable, tactile, numbing; and Pietro experienced a cold yet distant grief as he tried to remember his tender feelings (love?) for the beautiful Isabella as he visualized her heart shaped, freckled face and dark curly hair; and he remembered, yes, he remembered when she had caught him gazing into Maestro Mirandola’s gazing globe, which was now part of his soul and viscera; remembered her calling him a heretic in the catacombs of Florence…remembered his prediction that she would betray all her companions.

Shadows in the Stone will be published next year – details of the release date will be forthcoming soon.

Last night (15 February 2018) IFWG held a double book launch at Readings Hawthorn – a wonderful event. We launched our first two books for 2018 – Steven Paulsen’s anthology, Shadows on the Wall, and Jason Frank’s novel, Faerie Apocalypse. Jack Dann kindly (and entertainingly) MC’d the event, and the Readings’ crew did a wonderful job of looking after everyone. Book signings were had, speeches were made, and glasses were charged for the double launch. Thanks to all!

The following are some snaps of the event: 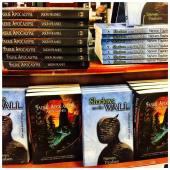 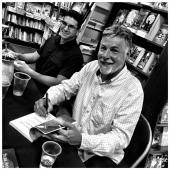 Jason and Steven at the signing desk – photo by George Ivanoff 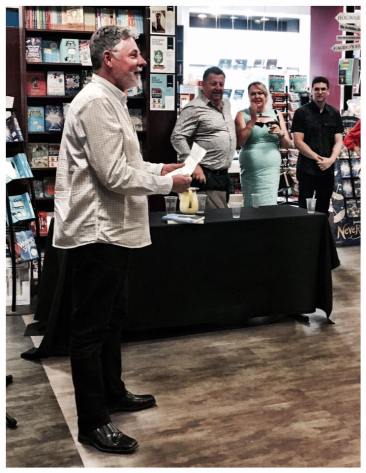 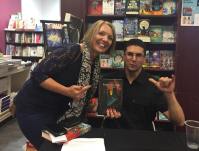 IFWG Publishing is delighted to announce the acquisition of Gillian Polack’s science fiction novel, The Year of the Fruitcake. The novel tells of the Earth-based life of a mostly-mindwiped alien anthropologist inhabiting a human perimenopausal body instead of her own more rational body with its capacity to change gender. Polack describes her novel as, “Bleak. It’s political. It’s angry. It’s also sarcastic, cynical and funny.”

And we agree. “We have never read anything like this novel, and we believe readers will be entranced by it,” commented Gerry Huntman, Managing Director of IFWG.

The Year of the Fruitcake will be released in the first quarter of 2019. 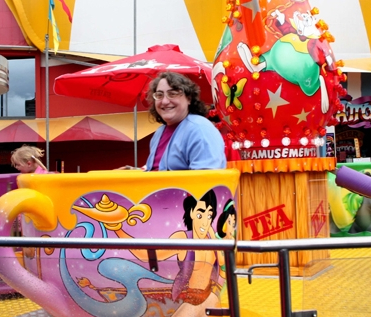 Gillian Polack is a writer, editor, scholar and teacher. Two of her novels and her 2016 research monograph have been shortlisted for awards. She has edited two anthologies (one of which was also shortlisted for an award) and has seventeen short stories published (one of which actually won an award and four others of which were listed as recommended reading on international years’ best lists). She has a PhD in Creative Writing and one in Medieval History. Her current research concerns how culture is embedded in narrative. Her hobbies include cooking and making bad jokes.