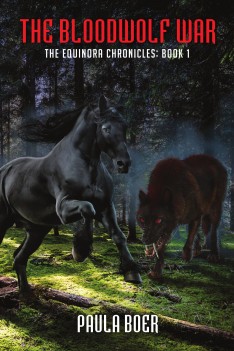 IFWG Publishing Australia is pleased to announce that Paula Boer’s young adult novel, The Bloodwolf War (Book 1, The Equinora Chronicles), will be released worldwide on 15 November 2019, and preorders are now available.

Equinora, the world where horses live in harmony with people, is in trouble. The six unicorn guardians created by the Goddess have abandoned their roles and vicious bloodwolves rampage across the land, massacring the herds and villagers.

Fleet, a young stallion without a territory, dreams of galloping with other horses and building a herd of his own. But an attack by a bloodwolf leaves him poisoned and alone. Driven by despair and a promise to fulfil his dying dam’s vision, Fleet sets out to discover how to vanquish the bloodwolves. The only help the renegade unicorns provide is to insist Fleet follow a prophecy to confront the villainous Shadow, an equine so powerful that the Goddess imprisoned him to prevent him destroying her realm.

Accompanied by Yuma, a young man desperate to escape his destiny, and Tatuk, a tiny dragon, Fleet seeks Shadow and a cure for the bloodwolf poison. But even as he begins to fear the selfish unicorns have sent him to his death, he discovers a secret that might mean he has a chance to save all horses and people from annihilation.

Despite the technological wonders of the modern world, enabling one to carry out business remotely, there is always the negative dimension where projects are carried out without ever having met some of the key participants. It was with pleasure that New Zealand author Jan Goldie was in Melbourne, Australia for a narrow window and was able to meet Sophie Yorkston (SQ Mag Editor in Chief and IFWG Publishing senior editor) and Gerry Huntman (Managing Director IFWG Publishing and Chief Editor). It was a short, but highly enjoyable time, with a great deal to talk about, and despite the casual and relaxed atmosphere depicted in the photo below, there was a good amount of work done as well – the perfect arrangement.

We are very pleased that SFSignal, a prominent and Hugo Award-winning international speculative fiction fanzine, has continued to support SQ Mag. This time they have provided a prominent article with Star Quake 1’s table of contents. Support them, and encourage them to support us!

The link is here.

We are so excited with the cover design for the 1 November 2013 edition of SQ Mag, we couldn’t help but leak it to you all. Steve Santiago is the artist, and he admitted it is one of his best. He also said that the live action model for his work is Miss Mosh, a talented and experienced model, noted for her flamboyant work in a recent Korn music clip.

just a reminder to those who don’t know, that SQ Mag is a free zine and comes out every two months. All our fiction is original. We also have running serials and book reviews.