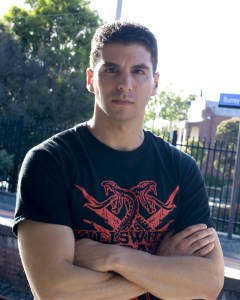 Jason Franks writes comics, prose and source code. His first novel, BLOODYWATERS, was short-listed for the 2012 Aurealis Award for Best Horror Novel. He is the writer of the THE SIXSMITHS graphic novels (a Ledger Awards finalist) and the comic series LEFT HAND PATH (also short-listed for an Aurealis Award), as well as numerous short stories in prose and comics. A collection of his mainstream short stories was collected in UNGENRED by Black House Comics.

Franks has published work in most genres, but he is most comfortable in the darker reaches of speculative fiction, although his writing is often humorous. His protagonists are likely to be villains or anti-heroes and the Devil is a recurring figure in his work.

Franks has lived in South Africa, the USA and Japan. He currently resides in Melbourne, Australia.