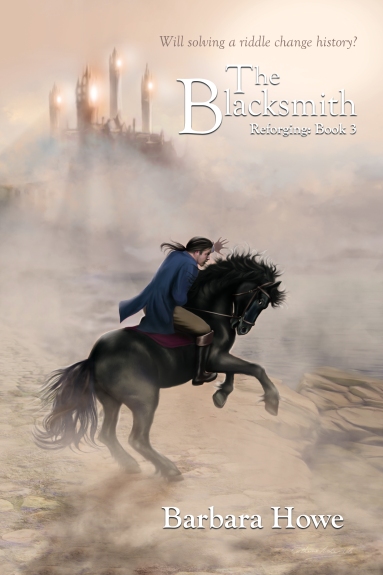 “This is the third of the Reforging series by Howe,” said Gerry Huntman, Managing Director of IFWG, “and it just gets better and better. Barbara shows us how to spin a convincing and evocative fantasy story, and suck the reader right in.”

How is the king like a blacksmith? He has a hammer as well as a sword.

Duncan Archer has heard that riddle many times, but he doesn’t know what it means. No one does, not even the members of the Royal Guild of Swordsmiths. It isn’t Duncan’s business anyway. Good sense tells him to stick to beating iron into shape for the residents of his backwater town, and not worry about the king and his nobles pounding Frankland into the ground.

But good sense never stopped Duncan from poking his nose into everyone else’s business. If it had, he might not be a fugitive, the subject of the biggest manhunt in the country’s history.

With a charge of murder hanging over his head like a sword, understanding that riddle becomes much more urgent…

The Blacksmith is available through all good bricks and mortar and online stores in non-North American regions. North America will have the release on 23rd September 2019.