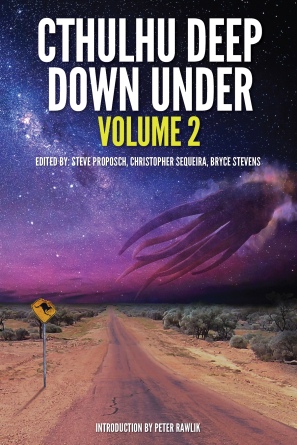 It is with pride and pleasure that IFWG announces the Australian/UK/NZ release of Cthulhu Deep Down Under Volume 2, edited by Steve Proposch, Christopher Sequeira and Bryce Stevens. It is introduced by Mythos guru, Peter Rawlik.

H. P. Lovecraft pioneered a fusion of terror and science fiction themes, and is widely credited as having invented the sub-genre of ‘cosmic horror’. While America’s New England was the focus and setting for many of Lovecraft’s tales, the Southern Hemisphere held a fascination for him. Australia, New Zealand and Antarctica were featured locations in his Mythosian novellas.

In tribute to this, presented here is an assortment of the finest Australian dark fiction, bringing you a second volume of Lovecraftian stories of wonder and dread. Featured are new tales by ROBERT HOOD, LEE MURRAY, KIRSTYN McDERMOTT and SILVIA BROWN.

Cthulhu Deep Down Under Volume 2 takes us back below the equator, into the bizarre and headlong towards horror. From mist-shrouded peaks and canyons of Melanesian islands, through rainforests and scorching deserts of the island continent of Terra Australis, and across the Tasman Sea to the inhospitable hinterlands of New Zealand.

Cthulhu Deep Down Under Volume 2 will be released in the North America on 1 September 2018.

One thought on “New Release: Cthulhu Deep Down Under Volume 2”