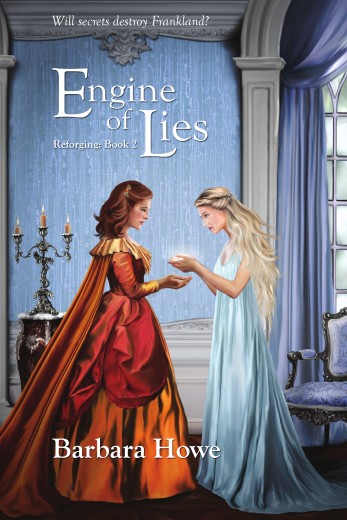 IFWG Publishing Australia is delighted to announce the release of Engine of Lies, by Barbara Howe, book 2 in her  young adult Reforging series. “IFWG has long recognised the immense catchment of speculative talent in New Zealand,” stated Gerry Huntman, Managing Director, “and Engine of Lies is the latest title representing that impressive pool. This series is impressive and what attracted us to publishing Barbara’s work is the strong female protagonists – young adults and adults alike will love them.”

NEVER, EVER, LIE TO A WARLOCK

He never promised happily ever after, but Lucinda is still dismayed by how quickly reality intrudes on her fairy tale. Assassination attempts and lightning strikes disturb her honeymoon, but the return home brings no peace of mind. When the discovery of a magical conspiracy shakes her faith in everything she trusts, she vows to expose the Fire Warlock’s most shameful secret and see justice done.

As a hot summer draws towards a violent end, Lucinda teeters between terror and rage. She’d be less angry about risking her life if she didn’t suspect her husband – her hero! – intends to step aside and let her die.

For those who haven’t been introduced to the Reforging series, read first Book 1, The Locksmith.