We are pleased to reveal the full cover spread and table of contents of Cthulhu Deep Down Under Volume 2, which will be released worldwide 1st August 2018.

Cover art and design by the very talented Steve Santiago, and edited by Steve Proposch, Christopher Sequeira, and Bryce Stevens.

Introduction by Peter Rawlik
Sleeping Dogs by Kirstyn McDermott
Slither by Jason Nahrung
Melbourne Calling by Silvia Brown
Time and Tide by Robert Hood
Dead End Town by Lee Murray
The Pit by Bill Congreve
The Island in the Swamp by J Scherpenhuizen
Where the Madmen Meet by T.S.P. Sweeney
The Seamounts of Vaalua Tuva by David Kuraria
Depth Lurker by G.N. Braun 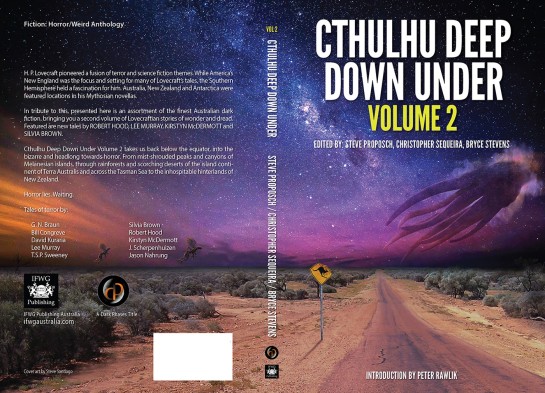